As I write this I am listening to the clank, clank, clank of pool balls hitting one another. Linus has discovered our kid size pool and air hockey table. His new favorite game is putting his paw in the pocket where the balls are stored and batting them around. 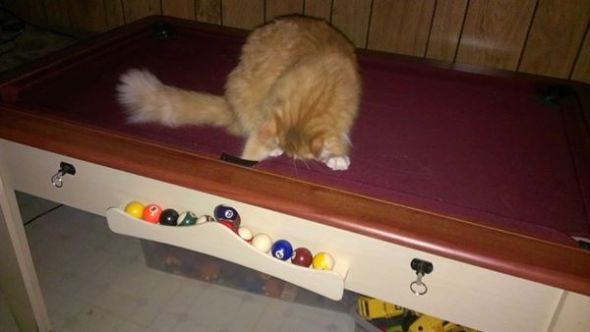 Yesterday was a rainy morning and Bonnie was clearly dealing with some rainy day blues!

This week brought change into the pups lives, we didn’t think it was going to be a big deal but once again we discovered something new about our pups, Belle doesn’t like change.  We moved their crates to our upstairs hallway freeing up space in our dining room and moving the pups closer to us during the night.  At first they thought it was great fun finally being able to go upstairs when it had previously been off limits.  Both Bonnie and Belle explored our bedroom, the bathroom and esp. their crates which were now in a new environment.  That first night after the last potty time I said what we always say “Ok, pups bedtime!”  and Belle ran into the dining room and looked first at the spot where Bonnie’s crate used to be then at her spot then looked at me with a confused look on her face as if to say “And where would bedtime be?”  I said ” come on, upstairs!”  and up we went.  I had made sure that their blankets and stuffingless foxes were in their crates and in they went.  Both pups were uneasy but Bonnie settled down pretty fast. Belle kind of whimpered then with much sighing settled down.

The  next morning we came downstairs and began our morning routine.  When the crates were in the dining room it wouldn’t be  unusual for the pups and Linus hang out in the crates so in an effort to make a comfy spot  I put a blanket on the floor where Bonnie’s crate had been.  Belle settled down on the blanket but clearly was still confused.

Last night it went better, although since we have had the pups I have assumed any noise in the night was Miss Bonnie but I am learning that Belle is quite the restless sleeper. I know though that given time both pups will settle into our new routine and will think it’s the best thing since peanut butter and cheese stuffed Kongs!

Follow Three Pups and a Couple of Kitties on WordPress.com

Andy the Persian cat and I miss Dougy

Doggedly Yours... Howling, Humor, and History.

~ Art, cats, nature, animals, weather, and whatever. Painter at heart ~

Following in the legendary pawsteps of Lexi the Schnauzer

Three Pups and a Couple of Kitties