I really like sitting on the back of the couch. I’m the looker out of everyone and I can see better up here. Plus it’s comfy. Plus plus she lets Linus Kitty sit there so I don’t see why I can’t. 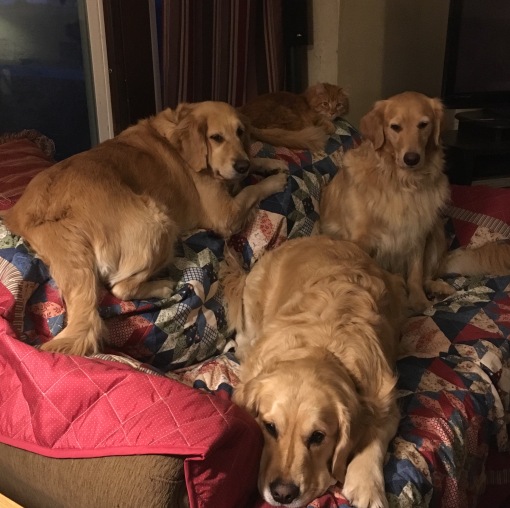 This morning I stubbornly er insistently um er persistently sat there 5 times and 5 times My Margret patted the couch cushion and said my name. That was shorthand for “Belle get off the back of the couch.”      We’ve done this so often that she doesn’t even have to say down anymore. I just know.

Because in the end I’m the good girl of the bunch I would move but then when her back was turned I would go right back.

One of those times My Greg was standing there watching and when she told me to get down I looked at him to see if I really had to. He didn’t say anything but turned and went out of the room. The least he could have done was back me up. Oh and I think I heard laughter, what’s up with that!

Finally I got tired of playing the stubborn er  insistent er persistent pup game and just laid down where I was supposed to but I made sure to have a good pout going.

~ this is Belle “the why can’t I sit on the back of the couch?” Pup for the rest of the pups and kitties.

Follow Three Pups and a Couple of Kitties on WordPress.com
Join 257 other followers

Daily adventures of living with a bunch of cats

Me and my Granny

Slice From the Middle: Susan Vollenweider

One woman's exhausting and clumsy journey through American life

Pursuing Dignity & Peace
Three Pups and a Couple of Kitties

Andy and I miss Dougy

Following in the legendary pawprints of Lexi the Schnauzer