After several days of not much happening u’m I mean transitioning I decided to cuddle Lucy and stand at the doorway between the front room where Lucy likes to hang out (when she isn’t upstairs) and the living room.  There is a child gate in the doorway which the pups could just about step over but they don’t seem to realize that and frankly I hope they never do.

Anyway, Lucy and I hung out in the doorway while Bess barked and barked and barked and barked and ….  Lucy cuddled into me, wasn’t frightened and actually was purring.   I wish I had an extra hand so I could have taken photos of Bess while she play bowed, barked to the left, barked to the right, cocked her head ect.  it was quite the show.  She occasionally would turn to look at her sisters for backup  while they pretended they weren’t there, in fact Belle went to the kitchen to ring the “gotta go chime” so she could go outside.  Needless to say that summons went unanswered. so we now had the twinkling of a wind chime mixed in with the barking.

After several minutes of this Lucy and I stepped over the child gate and into the living room.  Lucy became agitated at that point so I quickly stepped back into the front room where she jumped down and ran to the back of the room.    I took Bess out to the pup pen and went back to get Lucy to bring her back into the living room but Bonnie and Belle who know much better decided that they wanted to play and Lucy clearly didn’t.   Back to the front room she went.   After letting Bonnie and Belle out to the pup pen I went back got Lucy and brought her into the dining room.   After some cuddling and soft talking she said “thank you very much but I want to go back to my space” so that’s what we did

All in all I think it went great. Lucy gave Bess the “I am the head of the 4 footed family members and you will respect me.” look and Bess is starting to understand what her sisters learned a long time ago.    We will give it another try later this weekend but we are making headway!

We enjoy going to classic car shows. We decided to go to one tonight and in an effort to help Belle become comfortable in new situations we took her with us.

Some of her new experiences included walking across railroad tracks, walking into a crowd of people of all ages. She heard an ambulance siren and loud music. She had a Great Dane come up and try to say hi and was petted and greeted by Bob a good friend of ours.

Overall she did well but about  20 minutes into the event she was starting to get anxious so Greg decided that we had stayed long enough for Belle’s first time.  We finished the night off with ice cream from Johnny K’s which Belle totally loved. 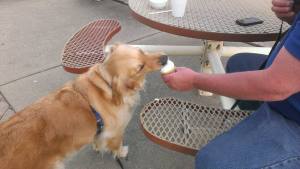 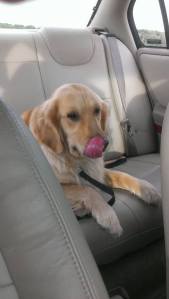 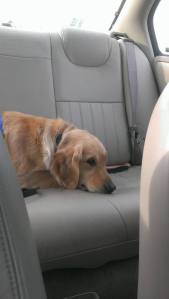 A tired out Belle

So…two things happened at the same time last night at 2:00am. I woke up to three golden retrievers standing on and around me and I heard a very loud close crack of thunder.  Lora our trainer would be proud, as I was coming out of the fog of sleep I heard myself say, “Yea! Thunder!…

After I persuaded the pups that I was awake and to get off of me, I got up to go shut windows closely followed by three 4 footed window shutting supervisors.  When we final made it down the stairs  we woke up Lucy kitty who could have cared less about the storm and let us know we were disturbing her sleep. Sorry Girl!

Windows shut I told the pups that it was still bedtime and we were going back to bed. They again closely followed me back up the stairs to bed where they proceeded to let Greg know all that was going on. After a bit with several Yea thunders and “it’s fine” added to the mix we managed to get everyone settled down and when we turned the lights back off Bonnie was curled up between Greg and I, Belle was on the floor as close to my side of the bed as she could get, and Bess stationed herself in hallway where she occasionally would snuffle growl at the distancing thunder.

Thinking back on it the pups woke us up in a manner true to their personalities.  Bess stood on me and expected me to get up. We are still working on the fact that something being stood on by a 50 + pound pup doesn’t move too easily, pretty much the way if we stand in the way of the door it won’t open. She starting to understand, it takes time.

Belle maneuvered between me and Bess and alternatively licked my face and used her head with all of her 60+ pounds behind it to nudge me off of the bed.  Bonnie also 60+ pounds was on the bed getting some licks in but upon seeing her sisters getting the job done decided to let them take care of it.

All in all it didn’t take too long maybe 45 minutes to get everyone settled back down. Just enough of an interruption in sleep that Bonnie at 6:00am is already taking a nap!

So…. last night we decided to see how Bess pup who is 6 months old would handle sleeping upstairs with her sisters and Greg and I uncrated.

The only areas the pups have access to overnight is the hallway and our. Even then Bess was pretty antsy and she just didn’t quite know what to do because you know there were lots of good smells to sniff and lots of exploring to do.

Then all of a sudden there was a flash of light and a few seconds later some fairly loud rumbling.  Bess immediately started barking  to let us know there was something going on.  Belle jumped up on the bed to nudge me off of the bed to go take care of whatever that was. Bonnie stood at the ready to see what we were going to do.

Our dog trainer Lora during one of Bess’s puppy classes told us to make thunderstorms a party so puppies can handle the storms better.  Remembering that, I thought to myself how do you have a party at 11:30 at night, well by turning it into a slumber party of course.  Calling the pups to come with me we headed downstairs, it had been several months since we had had a thunderstorm so all three dogs were stuck like glue to my side.  We had cuddle time during the worst of the storm, yes, it is possible to cuddle three golden retrievers weighing between 50- 60 some lbs each at the same time. When the storm started to move away I grabbed a quilt and settled down in our oversized recliner for the night.  Bonnie decided to share the chair with me, Bess was happily laying on the floor about a foot from me, and Belle was curled up on the couch also about a foot from me.   Linus and Lucy kitties weren’t bothered by the storm but they did curl up on the chair with me to give their support. Thanks Kitties!

This morning Bess woke me up by gently laying her head on my arm, saying “it’s morning, I need to go outside please.”  After checking things out I discovered that Bess did well being uncrated all night, there were no accidents and nothing was chewed up, so we’ll give it another try tonight, hopefully there won’t be any storms to add to the fun so we can sleep upstairs.

Belle became very anxious at the  CGC class again tonight so she and Greg ended up leaving early.  On the way home they stopped at a park and went for a long walk.  Greg said she did just fine and they had a good time.

We have decided that for Belle the journey to becoming a therapy dog is done.  For whatever reason she just gets too anxious.  We have tried several things to help her and while it makes it better it doesn’t take her anxiety completely away and we love her way too much to put her through that.

So Abbott’s Timber Creek Mae Belle is not going to be a mama, because of her hip dysplasia, and she isn’t going to become a therapy dog because of her anxieties but she is going to continue to be our Belle baby, the snuggler, the “wake Margret upper”,  the blanket stealer, the tennis ball loving, second in command  of our 4 footed family members, (Lucy kitty is still first.) precious, special smiley pup.

Follow Three Pups and a Couple of Kitties on WordPress.com
Join 257 other subscribers

Daily adventures of living with a bunch of cats

Me and my Granny

Slice From the Middle: Susan Vollenweider

One woman's exhausting and clumsy journey through American life

Pursuing Dignity & Peace
Three Pups and a Couple of Kitties

Andy and I miss Dougy

Following in the legendary pawprints of Lexi the Schnauzer